A History Of: Hannibal. Episode 30 - Let's Talk What If

This week we have our second 'Let's Talk' episode; this time our guest is the host of the Twilight Histories Podcast, Jordan Harbour. Jordan and I venture into Alternative History and imagine what would happen if Carthage had won the Punic Wars. We muse over the fate of Italy without Rome, civil war at Carthage, a Carthaginian monarchy with Hannibal as king, the effects of Carthage meddling with the Jews, who would win a fight between Hannibal and Philip V of Macedon, how Europe would cope against the Huns without Rome, and of course the inevitable Buddhist Europe. Want to know how we get there, you have only to listen! Find the episode right here or on iTunes.

It’s always difficult to agree on what would happen next and that is half the fun.  I know you are a fan of the beautiful game so I am going to use a football analogy to illustrate the difficulties.  If your team has a perfectly legitimate goal ruled out in a goalless draw, there is a tendency to argue that, but for the myopia of the officials, your side would have won 1-0. However had the goal stood, play would have re-started from a kick off and all the subsequent play would have been different.  1-0 is only one of many possible outcomes.

So if the Carthaginians had defeated the Romans, and let’s assume it was a knock out blow with no chance of a comeback, what would have happened next? Would the Carthaginians have beaten Mithridates in the next round, then eliminated the Gauls before beating a British side poorly managed by Caractactus to set up a final against the Germanic  hordes ? (As in football you can always count on the Germans to make the final).

I would suggest not.   I don’t think that Carthage had the resources or the cultural impetus to drive on and establish Carthaginian superiority across Europe. Hannibal did not seem to have a clear plan for his Italian adventure and I think he would have settled for simply removing the Roman threat.  The remoteness of their African capital would also have militated against further expansion.

I suspect that they would not even have turned up for the Mithridates match and settled for a sphere of influence covering Spain, Italy and North Africa.   So what would have happened then? Would the bourgeoning Gallic and Celtic cultures of Northern Europe flourished in the absence of Julius Caesar and his size nine boots?   Would these disparate tribes have united to form a Celtic nation that would have pushed south into Carthaginian Spain and Italy?  What would have happened in the east without the bulwark of Roman military might?  Would the Parthians or Sassanids pushed west into Europe and where would they have stopped?

Clearly nobody knows, but I would argue that in answering this question you can’t simply replace the Roman Empire with a Carthaginian one.  Unfortunately for supporters of Carthage City or ‘Rome is Overrated United’  this question quickly mutates into ‘what would happen if there had been no Roman Empire’.

So here’s my view.  The Roman occupation of Judea was a catalyst for a re-focusing of Jewish identity including the teachings of a certain Nazarene carpenter.   The Roman Empire provided the information super highway by which St Paul was able to spread these teachings through Europe culminating in the conversion of the Roman Emperor Constantine.  Christianity survived the dark ages and, for better or worse, became the driving philosophy for a Europe that went onto dominate the world.  So Carthage beats Rome -no Christianity - no enlightenment or renaissance - no protestant work ethic (hurrah!) – no Industrial Revolution – no Internet – no History of Podcast (boo).

So I am listening to the History of Hannibal on my i-pad whilst keeping an eye on the Rome Carthage match on my alternative history app.   It’s late into injury time when the Carthaginian striker, Hannibal rises at the far post to metaphorically nod the ball past the Roman custodian Scipio. The flag stays down! The Romans are out!  Carthaginian supporters run riot through the streets of Rome.  Suddenly my i-pad starts to disintegrate before my eyes, the podcast gets fainter. I can’t hear Jamie, why can’t I hear Jamie…Warum kann ich Jamie nicht horen. Slowly my surroundings come back into focus and I blow out my bedside candle and go to sleep.

This scenario is obviously very tongue in cheek, Euro centric and does a great disservice to the scientific knowledge of the Muslim world and China. But I think at the end of the day all one can safely say is that if Carthage had managed to strangle the nascent Roman Empire at birth the world today would be a very different place.
Posted by Jamie Redfern at 03:24

This week we are finished with breaks for the moment and get back into the action. We look at what happened when Mancinus tries to kill some Numidian horsemen and when Fabius manages to trap Hannibal in Campania. Hint: neither goes well for Rome. I also give a lengthy explanation of why Fabius was not a great general, as well as announce the creation of the TheHistoryOf Podcast Store! You can find it here or on iTunes.

http://archive.org/download/AHistoryOfHannibal.Episode29-OpportunityKnocks/Episode29.mp3
Posted by Jamie Redfern at 09:45

We now have an official podcast store! It will be expanded over time, but you can now buy TheHistoryOf Podcast merch! You can get to it through the link at the top of the page, or through the Facebook Page, or at http://thehistoryofpodcast.spreadshirt.co.uk This will replace the Amazon recommendations which have been taken down.

Some of our launch products are: 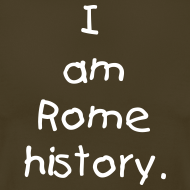 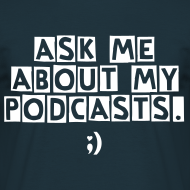 Here you can find some of my favourite podcasts which I heartily recommend you listen to. After you've listened to all of my shows of course.

The History of Byzantium - Robin Pierson

The History of Philosophy - Peter Adamson

The History of Rome - Mike Duncan

The History of the Papacy - Stephen Guerra

The Life of Caesar - Ray Harris and Cameron Reilly

The Podcast History of Our World - Rob Monaco

The Complete Guide to Everything - Tim Daniels and Tom Reynolds

The Roosterteeth Podcast - Rooster Teeth
Posted by Jamie Redfern at 02:16

A History Of: Hannibal. Episode 28 - The Dictator

Happy new year everybody! This week we look at what happened after Trasimene. We see the reaction at Rome to the news and watch Quintus Fabius Maximus be appointed Dictator and Minucius his Master of Horse. We then see Fabius's plan for the war; to avoid battle. Find the episode on iTunes or right here.

http://archive.org/download/AHistoryOfHannibal.Episode28-TheDictator/Episode28.mp3
Posted by Jamie Redfern at 09:13

Welcome to the home of TheHistoryOf Podcast. Here you can find our podcasts, links to social media, a donation button, maps, recommendations and all the latest podcast news.